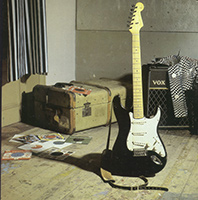 Cal Green (June 22, 1935 - July 04, 2004) was a talented and versatile Texan guitarist who started out imitating his favourite local Blues players, then got a gig playing with one of the biggest R&B acts of the 50s, co-wrote a worldwide hit, then switched to Jazz in the 60s but returned to the Blues in later life.

Cal Henry Green was born in Dayton Texas, His idol as a teenager was Lone Star wonder Clarence "Gatemouth" Brown. As teenagers, Cal Green and his older brother and fellow jazz guitarist, the late Clarence Green Jr., rode on local buses, performing for tips from passengers. So pervasive was Gate's sway that Green and his ninth-grade pal Roy Gaines used to stage mock guitar battles imitating their idols (Gaines was a T-Bone Walker disciple) at various Houston bars.

Cal Green played on RPM Records releases by Quinton Kimble and pianist Connie McBooker and Big Mama Thornton, but his main claim to fame is as the guitarist for Hank Ballard & the Midnighters, who roared through Houston in 1954 looking to replace their just-drafted axeman Arthur Porter, scooped up teenaged Green, and went on their way.

Green received plenty of solo space during his Midnighters stint. His ringing guitar provided a sturdy hook for the group's rocker "Don't Change Your Pretty Ways" and figured prominently on "Tore Up Over You" (later revived in blistering fashion by rockabilly giant Sleepy LaBeef) and "Open Up the Back Door." The Midnighters' label, Cincinnati-based Federal Records, thought enough of Green's slashing Texas licks to cut a couple of 45s on him in 1958: the double-sided instrumental "The Big Push"/"Green's Blues" and a pair of vocals, "I Can Hear My Baby Calling"/"The Search Is All Over."

In 1959, Hank and Cal co-wrote ‘The Twist’ after adapting an idea from a Brother Joe Wallace spiritual. The song was the B-side of Hank and The Midnighters’ single ‘Teardrops on Your Letter’, which went to No.4 in the Billboard R&B charts, but when Chubby Checker covered ‘The Twist’ the following year, it went global. By then Cal’s name had slipped from the credits, but that was not his biggest problem as he had just been busted for marijuana and was serving 21 months in jail, which put a serious crimp in his career.

He re-joined the Midnighters for a while, but decided to move to LA and got into the West Coast jazz scene. He appeared on keyboard player Charles Kynard’s acclaimed ‘Professor Soul’ album of 1963 and went on to play with Jack McDuff and Lou Rawls while making a good living as a session man around the LA studios. He recorded several singles and eventually an album.

His 1967 solo jazz album ‘Trippin’ on the Mutt and Jeff label is a vinyl collectors dream. In 1988, Cal recorded another solo album, ‘White Pearl’ for the Double Trouble label which returned to his Texas Blues roots and although his singing isn’t of star quality, his emotive and tasteful guitar work certainly is.

Appearances at the Long Beach Blues Festival confirmed this, and his name popped up again when a 1967 studio composition from Cal’s ‘Trippin’ album called ‘Revolution Rap Part 2’ was sampled by hip-hop producer Madlib on his 2004 ‘Mind Fusion’ mix. Sadly it was a little late for Cal to enjoy the royalties, as he died of an aneurysm in his home in Lake View Terrace, California on July 04 of that year. He was 69.
Billy Bryan
Benutzer